The protagonist, Shirley, gives us insight into her adventures across the world, as she sought out to find a way to get out of the rut, she had found herself in, via travelling.

The film was shot in Twickenham, Oxford Circus, Bloomsbury and St Pancras Station, yet it is most famous for the scenes filmed on the various beaches of Mykonos.

Indeed, the two most memorable moments in the film take place in Mykonos and are located in close proximity to one another.

For the diehard fans who want to know where in Mykonos Greece was Shirley Valentine filmed and how to frequent those areas, this is certainly one to read…

Otherwise known as the ‘Shirley Valentine’ beach, this is where actress Pauline Collins sits and admires the view near the end of the movie, realizing that her dream is not over yet, calmly awaiting the arrival of her furious husband Joe as she continues to gaze into the setting sun.

Most fans see this scene as one of the most memorable in the film, given that it is a breakthrough moment where Shirley is finally able to rid herself of the demons that have been keeping her in her rut – she finally realizes that life has more to offer, outside of Costa and Mykonos.

‘I have allowed myself to live a little life when there was so much more’.

So, this is where most people want to travel to when they think of where in Mykonos, Greece was Shirley Valentine filmed. 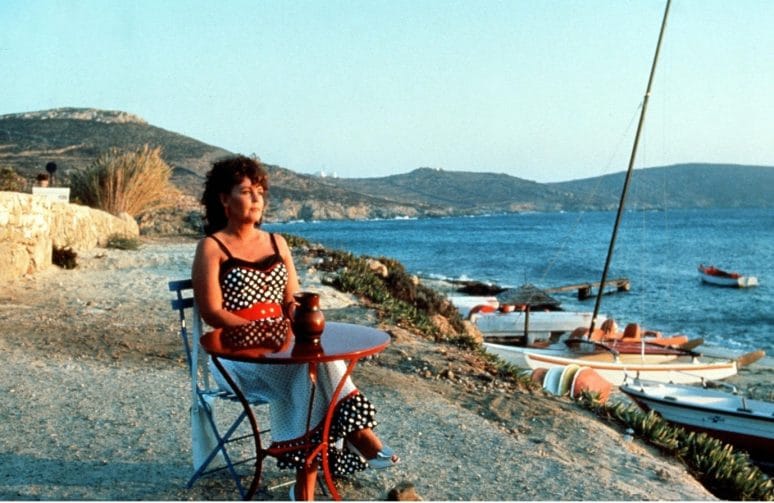 Shirley’s journey to realisation is complete…

Unlike the calm serenity that seems to wash over it in the dying scenes of the film, the area is now populated with tourists looking for things to do in Mykonos.

From tapas bars to fun areas of water and beach sports, there is a sense of modernization that has blossomed since the days of the late eighties.

The Ornos beach, however, remains a historical landmark to fans of the film.

The Shirley Valentine beach in its full glory…

If that’s you, then the Agios Ioannis beach is definitely a place to put on the visiting list.

And it couldn’t be easier to find, particularly if you’re staying at Adorno Suites. From here the beach is a 4-minute drive, or if you want to enjoy the sun and sea breeze, a 20-minute walk.

The Hippie Fish now stands where Costas’ Restaurant stood – the Sunset Taverna – all those years ago in 1989, and if you’re a die-hard Shirley Valentine fan, this is definitely one that you won’t want to miss.

Indeed, the taverna featured important scenes. It was where Shirley got a job in the movie, and where she met Costa – a man who would change her life for good and bad forever.

When she first wandered into the restaurant there was little to suggest that her life would feature any positive changes.

She had just jumped onto a plane for a spontaneous trip abroad with her friend, Jane, who ditches her at the airport for another man, leaving Shirley in the middle of a foreign country to fend for herself. 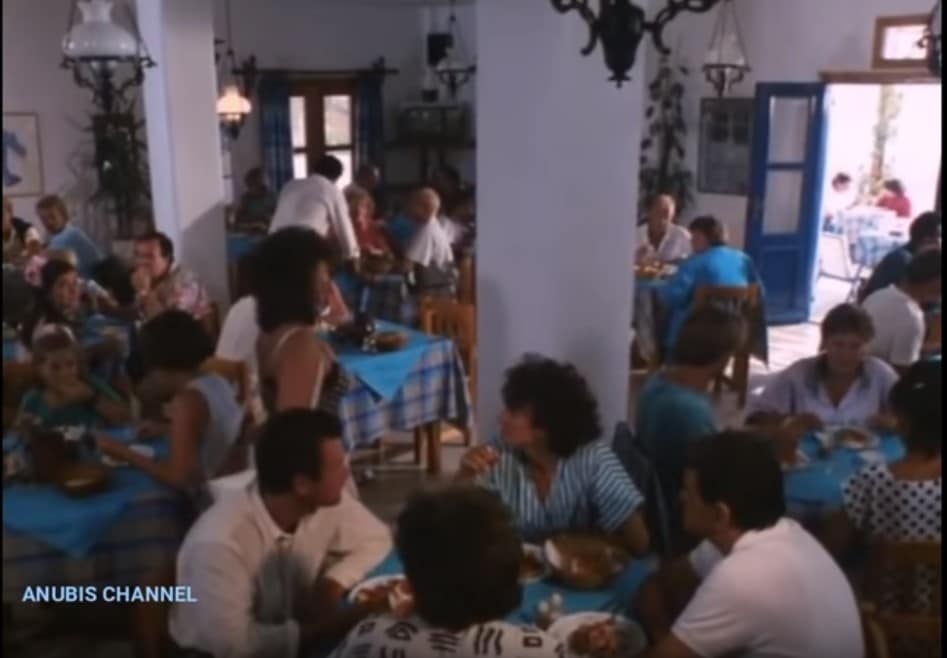 However, by the end of the film, it can be argued that walking into that restaurant and meeting Costa was a catalytic moment and changed the tide in the direction of life she was moving in for the better.

Nowadays, the Hippie Fish, while still possessing remnants of its former accommodation, has taken a modern turn.

With sophisticated, white-coloured palettes that give the place a vibrant and contemporary look/feel, there is a refreshing tone to the area.

Yet, traditional Greek and Mycenean cuisines, which you can also experience with our bites and drinks, ensure that traveling Shirley Valentine fans get whisked back to the sandy beaches and lifestyles of 1989. 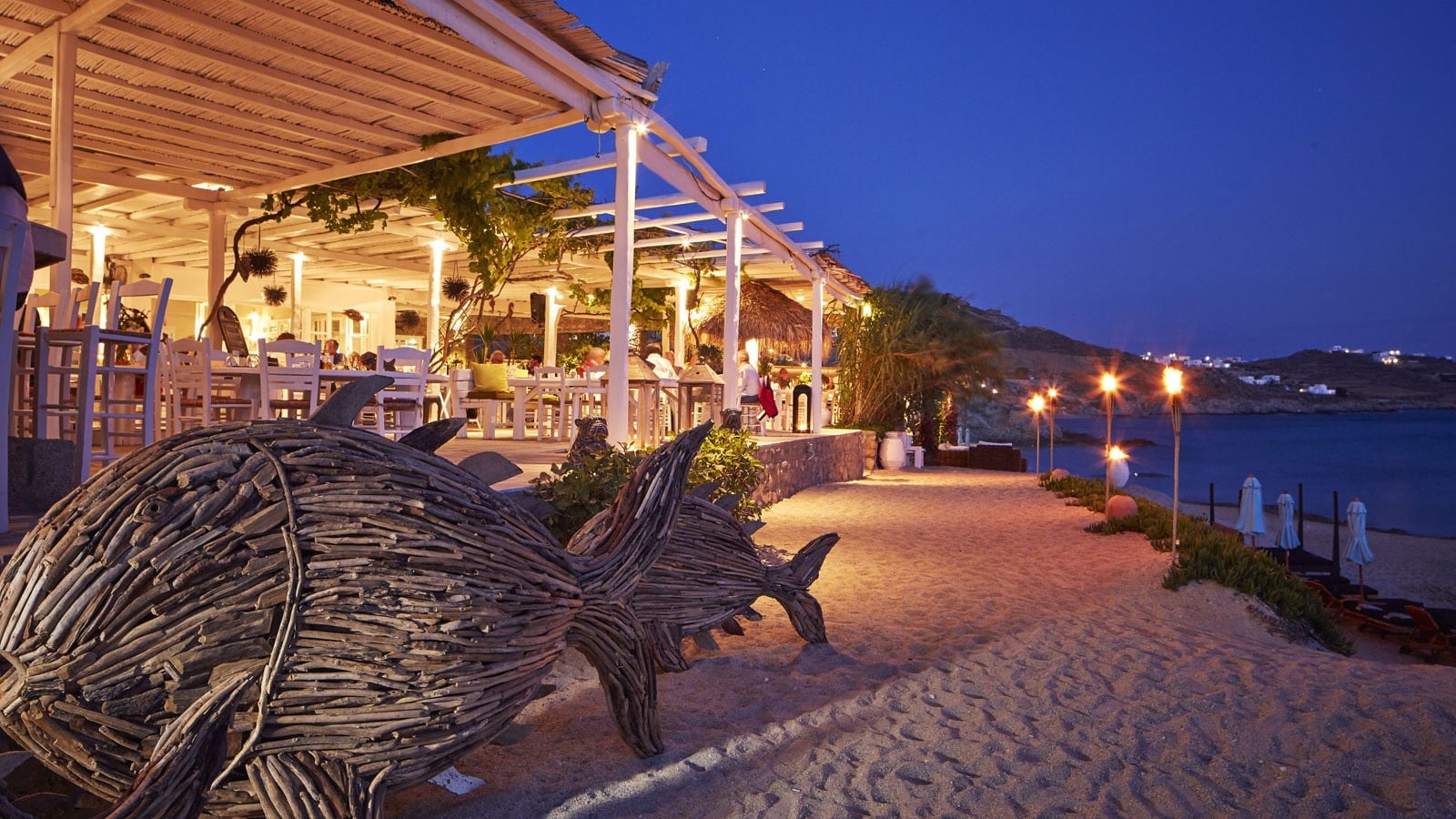 Getting there couldn’t be easier, given that all of the famous scenes were filmed by Gilbert in close proximity to one another, your trek around where was Shirley Valentine filmed should be an easy one.

Especially if you’ve taken a stop at the ‘Shirley Valentine’ beach first. In fact, the restaurant is within walking distance…

You could get some local Greek food for lunch at the Hippie Fish and then relax at the beach, or vice versa, making for a nice little outing in amongst the place where in Mykonos, Greece, Shirley Valentine was filmed.

All in all, for those die-hard fans of the movie, or even those curious in the film history and Gilbert’s choice of location, you’ll be able to frequent all the famous places – including the best bars and clubs – that the actors and actresses frequented with this nifty little guide.